New Year’s Eve with My Dad

Although I rarely go to New Year’s Eve parties any more (cue: one big whine and then a hefty sigh of relief), when I was growing up NYE always meant parties.  My parents went to one or hosted one every year.

In the sixties, my parents held their parties in the basement of our house.  Mom draped a paper tablecloth over the ping-pong table and Dad stocked the bar he’d built in the corner.  He set up table games and placed ashtrays on every available surface.  When he dragged out the box with the hats and noisemakers and boas I scrambled to help.  My favorite was the noisemaker blow out.  When I blew on the pipe end, the little roll of paper unfurled with a sputtery raspberry.  The tin drums which spun on wind-up stems sounded a raucous blare, so Dad would grab one of those and twirl it.

In the kitchen, my mother made canapés and Chex Mix.  She refrigerated 7-Up and washed the “frosted” highball glasses. Gold leaves, which I was sure were 24k gold leaf, decorated the crystal.

I’m not saying I was a snoop, but I could hear everything.  I could even see a flash of the neighbor’s shiny bald head or Dad’s hand dealing cards through the register in the floor right near my bed.  I sat on the floor for hours with my legs cramped up underneath me.

While I didn’t hear anything of particular interest, the social interactions between the adults—their jokes, the vibrations in their voices, the sudden bursts of laughter– kept me straining my hearing.  Dad’s loud, excited voice rose above the others.  Everyone else faded into a background buzz in comparison with him.  Dad was the life of the party.

For his 80th birthday I made him a video of his life, and when Dad saw himself on video, he said, “I didn’t know I was so obnoxious!”  I had to laugh to myself at that because it isn’t as if nobody has told him that over the years.  Mostly, though, his enthusiasm for having a good time has been infectious.  At eighty-four he still likes to stir things up.  I suspect he’ll be wearing a hat and sounding his noisemaker at midnight tonight in Michigan. 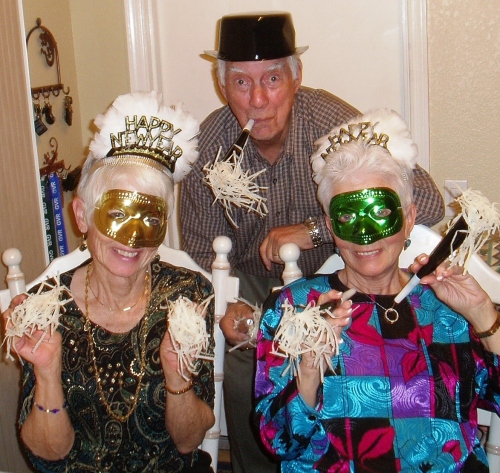 Dad is ready for the party!

I live in the Southwest, but I almost wish I could be there, listening through the register.

12 responses to “New Year’s Eve with My Dad”