All the babies in the yard are grown up, and every so often a hummingbird or dove swoops past me that looks a little familiar ;).

I am winding up the physical therapy now. I had two problems: rotator cuff calcification tendinitis and frozen shoulder. The PT has cured the frozen shoulder at least to 85% usage. The other will take much longer as I need to keep exercising. Eventually, the calcification is supposed to be absorbed by the body.

My brain is a little zapped right now. I’m concerned about health problems my daughter is having, and I am feeling stunned over the condo collapse in Florida. When I’m feeling like I am right now I am convinced that the greed and arrogance of humanity is going to take us down.

Also, I have claustrophobia so I spent days worrying about the people in the collapse.

Trying to cheer myself up, I made this page in my smallest journal. Fabrics from my childhood, and the button belonged to Grandma.

Notice that I’m making a little fun of myself, too, as 19-year-old me thought that big-a** hat looked stylish.

Putting the finishing touches on the first draft of the newly “remodelled” Scrap.

I’m focused on being a good nursing home nurse for Pear Blossom. She’s doing well getting up and down from the couch with that one seat cushion removed. But sometimes she chooses to lie on the cool floor near her water bowl. Pee pads and water bowl are very near the couch for her convenience. She is still such a pleasure all the time. She’s my little nurse, too. She’s the one who got me through my one-year-plus foot surgery recovery and the Valley Fever. She used to take care of our last dog when he didn’t feel well. Imagine my surprise when I walked into the room and found her in Perry’s blue cube.

Pear wants you to have a wonderful week!

Today I am participating in Serena Agusto-Cox’s Poetic Book Tours hoopla for Sherry Quan Lee’s new poetry collection Septuagenarian. The title is not a word I am familiar with, but I looked it up and it means a person who is from 70-79 years old. How many times have you heard a collection “boast” that the poet is an older person, especially a woman? Not very darn often.

The summary provided by the poet gives a good idea of her focus in the book: “Septuagenarian: love is what happens when I die is a memoir in poetic form. It is the author’s journey from being a mixed-race girl who passed for white to being a woman in her seventies who understands and accepts her complex intersectional identity; and no longer has to imagine love. It is a follow-up to the author’s previous memoir (prose), Love Imagined: a mixed-race memoir, A Minnesota Book Award finalist.”

In the case of Sherry Quan lee, the term “mixed-race” means that her father was Chinese and her mother was African-American or, more accurately, 3/4 AA and 1/4 white. Quan Lee’s mother preferred to pass as white, and she tried to get her children to do so as well. This wasn’t always easy because it created secrets and lies “Mama said, / cover yourself with lies“), such as seen in the poem “Silence”:

one of us had thick curly hair like Mother’s, one of us

had silky straight hair like Father’s; and, yes, one was

beauty and one shame/hotcombs and gas flames and

it was complicated pretending

Quan Lee’s father also wanted to be white, she asserts. Sadly, her father abandoned the family when Quan Lee was five years old.

One of the most poignant poems is “Mother’s and Mine,” which writes about bruising from 28 different perspectives. Tellingly, she writes in #19, “When I stopped wanting what I couldn’t have, I bruised less often.”

This book appears to have been written during the pandemic. It contains some pieces from previous work published by the poet, as well as new work responding to a “woke” perspective. (In fact, she uses that expression to describe how she has learned from living to be 72 in the poem “I Woke to This Place”). It’s sort of a cobbling together of her past with her now-experienced outlook.  I love that she included photographs, especially her adorable cover photos, as well as her birth certificate. It really adds to the authenticity by helping document what Sherry Quan Lee’s life has been like. Reading the experiences of a woman who has gone through life differently than myself was fascinating. Because the poetic style is more literal and less figurative than I usually choose to read, I read this book more as an engaging and inspirational memoir than a poetry collection. Sherry Quan Lee’s story needed to be documented and shared, and I am so blessed that I was asked to read her book.

Earlier last week, one of the hummingbird babies left the nest. That left her “brother” behind. For two, almost three, days, Mama continued to feed him. Then one day, he flew a bit falteringly and landed on an oleander branch near the nest. There he stayed for hours. Mama fed him where he was. She flew in place to show him how it’s done. She flew away and came back. But she was always right there in the vicinity, helping him transition to an adult hummer. In this video you can see them in action.

My DIL told me that one of their hummingbird babies flew before the other, and that before the “runt” could leave the nest, Mama disappeared. Seeing how devoted these birds are to their babies, I can only surmise that something tragic happened to the mother. But, guess what? The more advanced sibling began to feed the one left in the nest, and eventually that one joined his brother or sister flying across the sky.

For those of you who don’t have hummingbirds by you, remember that their nest is barely larger than a golf ball, so these birds are very small.

A Route of Evanescence

BY EMILY DICKINSON
A Route of Evanescence,
With a revolving Wheel –
A Resonance of Emerald
A Rush of Cochineal –
And every Blossom on the Bush
Adjusts it’s tumbled Head –
The Mail from Tunis – probably,
An easy Morning’s Ride –
***
Make it a week to cherish! XO

The Babies and the Stories

Hummingbirds make such wonderful mothers. Six years ago, the hummingbird who raised two nests right outside my door was a good example. When one of her babies turned out to find it more difficult to learn to fly, she spent hours one afternoon patiently teaching the little one. The green hummingbird raising her babies in our oleander right now is another good example. First, before she ever laid her eggs, she completely moved her nest from the windchime/mobile to the oleander tree when she realized the first place was not safe. Now we’ve noticed that because the sun beats relentlessly on the babies in the mornings, she sits on them for protection even though they are now big kids. We expect them to fly away any day now. Here she is shielding them from the sun. 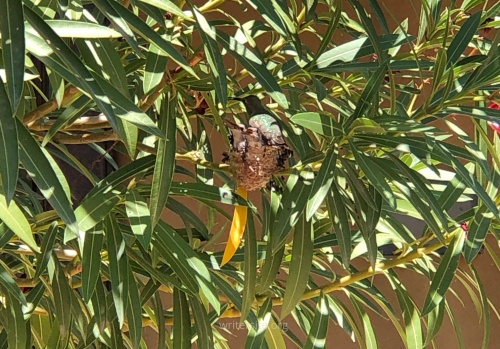 Last week I told you that Kana was enjoying a manuscript box, but Tiger would lie down in it when Kana wasn’t there.

I think I forgot to mention that my daughter gave me Storyworth for Mother’s Day. I had never heard of it before. Every week for a year I get a story prompt mailed to me. The idea is these stories are all about my life. As soon as I email one back, my kids get the story dumped in their inboxes. I am allowed to include photos if I like. And if I hit send and regret something I can easily edit it. At the end of the year, the kids will get books of “the story of my life.” Why is this different from creative nonfiction and memoir writing? These stories are geared for my kids and (hopefully someday) their kids. Some of the stories are already part of family legend, but now they will be written down in a permanent form. If I don’t like a particular prompt, I can change it out, but so far each one (I’ve done four) have been fruitful lines of enquiry ;). I’ve written about my first memory, most memorable birthday, favorite trip, and a time when I was brave. I’m not saying I wouldn’t share any of these on this blog, but not today, folks.

It’s a genius idea that I wish I had thought of before these people did hah. The reason it’s genius is that it’s got to be a money maker as it’s pricey. But I kind of think it’s worth it because who does this anyway? And keeps it up for a year? You could do this completely on your own. But will your loved ones keep writing those stories every week? They will if they know you paid for the subscription!