In September I posted photos of the fabric scraps I still have from my childhood. The inspiration for ruminating on what to do with them came from a couple of sources. One was Dawn Raffel’s book The Secret Life of Objects.  The other was Swedish death cleaning–getting rid of stuff so my kids are not one day burdened with it.

I promised I would do something with the scraps, and I have not forgotten. I am far from the point of actually getting rid of the fabric, but did start a project that was suggested by sarahsouthwest.

I’m making a scrapbook of scraps! For each page I plan to include a fabric remnant, a story or description of the memory it stirs up, and, if possible, a photograph of the garment made of the fabric. So far I’ve only made the cover and one page, but thought you might want to follow along with the process. I’m not very good at crafts, but hey, it’s mine, baby, all mine.

First, I chose an ugly on-sale scrapbook and then padded it and covered it. I selected a print corduroy from the late 1960s for the front cover and a gingham from the early 1960s for the back.

You can see what my first page looks like in the slideshow above. I decided to keep the page very plain and even left the raw edge of fabric visible. In the photograph you can see me wearing the sleeveless tent dress that my grandmother made for me. It has a high yoke decorated with large embroidered white daisy appliques. I loved that dress. It was so comfy and very pretty. The type of fabric was called “whipped cream,” and was lightweight, airy, with a little texture to it. My mom’s cotton or cotton/poly fitted dress, also sewn by Grandma, was very Barbie-style.

This is the story I wrote about what the dress and the photo remind me of:

In this photo, my parents and I are in Canada, seated at a restaurant in the 1967 International and Universal Exposition.

The summer I turned 12 is the one I will always remember as a peaceful and memorable week with my parents. We left my 4-year-old brother with my grandparents in Kalamazoo and drove to Montreal for Expo ’67, the World’s Fair.

We stayed in Montreal at the winter (city) home of my grandfather’s 2nd cousin, Harold Remine, the Chief Engineer of Quebec Hydroelectric. It was a beautiful and elegant brown brick row house. The dining room was complete with all the requisite china, crystal, and silver. But the house was not large, and I had to share a bedroom with my parents.

Harold and Lillian also had a lovely lake home, which we visited. Harold introduced me to curling, a sport I had never heard about before, by taking us to a curling club.

The Expo itself excited and exhausted me. It had some elements in common with a state fair or Disneyland, a place I had not yet visited. There were snow cone and cotton candy booths, hot dog and burger stands. A caricaturist drew my likeness holding a book. I was disappointed afterward that I hadn’t given him a better hobby. Reading seemed so nerdy. But the truth was that I read more than I did anything else.

Each participating country sponsored a magnificent pavilion that was supposed to reflect the national personality. The U.S. pavilion was a huge geodesic dome—this is a sphere that is built of short struts that follow geodesic lines (the shortest line between two points on a sphere) and form an open framework of triangles or polygons. There were very, very long escalators that seemed to hang in “thin air,” and the park’s elevated minirail ran through the structure. The effect of being inside the pavilion was of being suspended in space. I believe I saw a doll collection and space race memorabilia, but since I was afraid of heights, I mainly remember my fear.

My favorite pavilion was the Burmese one. Under its appealing multi-roofed pagoda design, a gigantic golden Buddha dominated the interior lobby. I suspect that the restaurant in the photo is the Burmese one. To this day, it is my favorite type of food. If you haven’t been lucky enough to eat it, it is a cross between Thai and Indian food.

Habitat 67, a futuristic housing development, was situated near the edge of the fairgrounds. It reminded me of photos of Anasazi dwellings for some reason. I was both repelled by the makeshift quality and fascinated by a new way to conceptualize living quarters.

I guess my parents had decided not to bring my brother because he was too young to appreciate the cultural opportunity or even to go on the fair rides. But when we got home to Kalamazoo and stopped at Grandma and Grandpa’s to pick him up, he was flushed with a high fever. He sat on someone’s lap, and somebody else snapped a pic a second before he leaned over and threw up on the floor. That’s when I started to feel guilty that we had left him behind.

On one of my family history blogs, The Family Kalamazoo, I was chatting with family history blogger and blog friend Amy Cohen (check out her amazing work at Brotmanblog: A Family Journey) and I was trying to give her an idea of my grandfather’s personality. I directed her to the first poem in my chapbook Kin Types, “Advice from My Forebears.” I reminded her about two lines in it: “If they come to your door, feed them. Then send / them on their way.” This particular advice sounds exactly like my grandfather’s philosophy.

Amy said, “There’s something both soft and tough in it, probably like your Grandpa.” Amy was right. That was Grandpa.

What does it mean to be both soft and tough? In some ways I am both those things. I am uber-soft about animals, as you know, and a well-directed commercial about almost anything can leave me in tears. I am the same way about children’s issues that I am about animals–especially foster children and adoptees.

But I do have a little bit of a pull yourself up by your bootstraps iron somewhere inside, too. I lose my patience with people who I view as too soft on themselves. I don’t mean people with problems like mental illness, addictions, anything like that. I mean people who give in to their emotions excessively (IMO), but always when it is about themselves.

I didn’t intend this to turn into a vent, but I guess when you follow a thread into yourself, you find out what you don’t like, as well as what you do like.

I don’t necessarily like this aspect of myself. But I’m not sure that I don’t value it in some respect, also, because it means that I keep myself going, no matter what, I never give up trying to be a helper where truly needed, and I’m a hard worker like Grandpa.

That said, it isn’t up to me to decide when someone is being excessively about themselves. I can extricate myself from the relationship completely, or at least distance myself. But I need to stop judging or labeling and just do what I need to do. In other words, I need to send myself on my way ;).

I have a few writing goals this year. I hope I can accomplish even a quarter of what I plan haha. My submission acceptance goal remains the same as for 2019, and I already have three, so I have hopes that I will meet it once again. This year also will be a year of helping a bit with the wedding planning (for daughter and her fiance).

Perry and Sloopy Anne have been lying together on the bed for hours every day. So I can’t make the bed. Not a bad reason not to make a bed, huh? Sorry the lighting is so poor in there, but aren’t they cute?

Let’s make this week one that really counts!!! XO

Bravery on the Streets: RIP Dexter

This is Dexter, but it is just one of many names he has been called. He lived his life on the streets of Phoenix for many years. He evaded every trap that kind people set for him—and who knows how many that bad people set. He was covered with scars and his ears were all screwed up, but he was still gorgeous when you looked into his soulful eyes. When he knew the end was near he sought out my friend who had given him food and soft words, asking to end his days with her. She gave him a home for the past couple of weeks while he peacefully faded away in a quiet place. She was with him, petting and consoling him, when he passed away on Saturday. Dexter was a strong cat, a brave cat. He lived life on his own terms and died that same way. RIP to a cat I will never forget.

Dexter was very sick in these photos. I couldn’t let him pass away without sharing his story because courage isn’t an attribute special to humans (when you can find it) or to dogs. Cats and other animals also can be very brave and strong, facing up to the unfairnesses thrown at them in life. I wanted us to appreciate the strength this boy had to live his life the way he lived it. And the courage he found not just to battle for that life every day on the streets, but the courage to come to my friend when he finally felt he needed her. Bless her for noticing that he needed help beyond the usual.

Dexter lived in my friend’s neighborhood and was at least 12 years old, possibly as old as 15. He was a stray, not truly feral (I’ve written before that a lot of cats are classified as feral who truly are strays–and Dexter would have been seen as feral by some, but he really was not). He trusted my friend and some others enough to get close so they could feed him and even pet him. He lived in an area where coyotes hunt cats. My friend says he “owned” her neighborhood and now he is buried there.

Dexter is not confined to the cage you see. The door was open so he could move into the room. In case you wonder, my friend is very experienced and knows quite a lot about medical and behavioral issues with cats. She decided that he would be completely freaked out by euthanasia by a vet, although she held it in her mind as an option if he didn’t pass peacefully.

So please grieve for Dexter, but also celebrate his bravery and his strength and when you have a chance to help someone, please take the opportunity. If you don’t know about the good work of Alley Cat Allies please check them out.

I can’t leave you without showing you some happy cat rescues that I have recorded with my new iPhone. 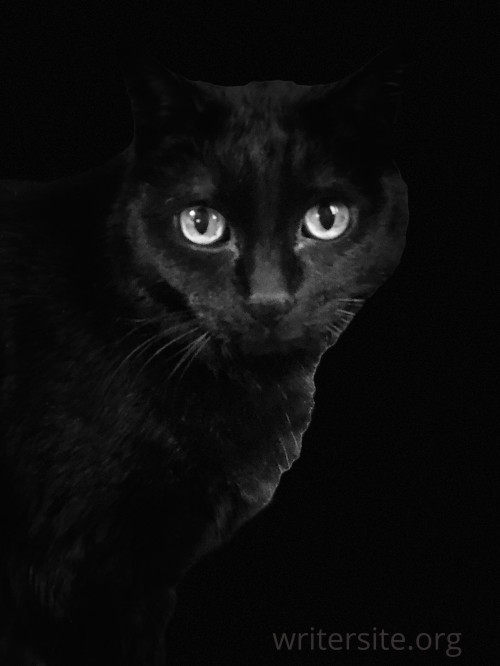 Felix is, um, I can’t remember which portrait mode. Felix was rescued from the streets. 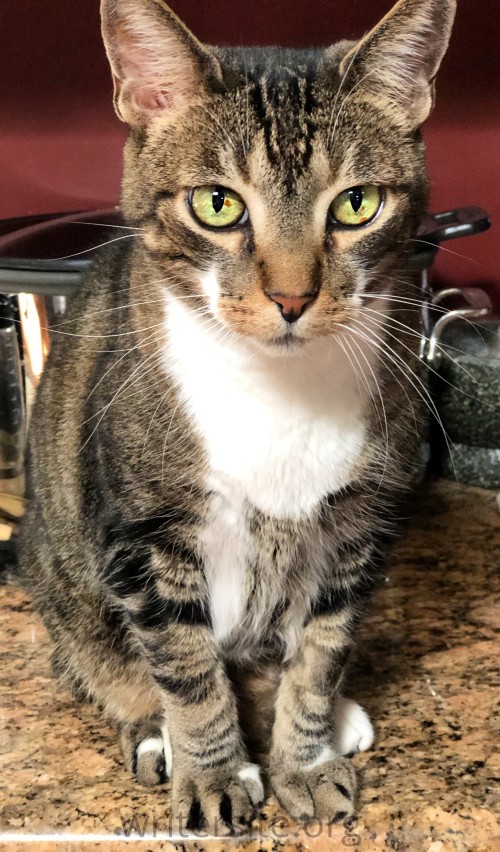 Perry is in stage light portrait mode. As you know, he was also rescued from the streets a la our backyard.