My  review of Karen Paul Holmes’ poetry collection No Such Thing as Distance has been published in the latest edition of the esteemed journal Pleiades.

If you get your hands on this gorgeous issue, you can find out why I think there are commonalities in Holmes’ work and mine. OK, here are some hints ;). She is also from Michigan, and the sense of place–places, really–is very important to her work. Also prominent are family and family history. Her book is beautifully written and extremely accessible.

On another note, I’m having foot troubles. And I also had a very telling dream. But first the feet.

My right foot is the one that has a reconstructed navicular bone. That happened 13.5 years ago and was a big, big deal. Now I have to be really careful so that that bone doesn’t shatter. About nine months ago I developed plantar fasciitis in the left foot, and no matter what I do, the pain is not letting up. This puts pressure on the right foot, of course. Then Friday morning I dropped my cell phone on my right big toe. Please let me out of this nightmare.

Speaking of dreams. Did you know that if you dream of a litter of kittens it means that you are feeling swamped and overwhelmed? The other day I dreamed that the shelter where I volunteer was closed temporarily. I went to check on it. Of course, it wasn’t that place at all, but an old-fashioned storefront with the store divided into three big rooms, all with glass windows in front. I knew right away why they were closed. They were overwhelmed–literally filled to the ceiling with kittens. There wasn’t even an inch between kittens. There must have been thousands in there. I wasn’t worried for the kittens because I knew the shelter would take care of them, but I was shocked at how many there were.

So do you see how overwhelmed I have been this month????????? I know in the end it will be ok, but I have never felt so overloaded with work as I have this month. I sure hope I get April to write poetry!

(Weirdly, I have worked on a little essay, but only the last couple of days, and I don’t know if it will turn out or not).

Sending love out into the universe. Please send back some extra minutes haha.

I might have mentioned that the gardener and I have had a lot going on in 2019 with relatives visiting and other urgent projects (non-writing, of course). I have been looking forward to April to write some poems. Ahem.

Friday I went to the doctor for the plantar fasciitis in my left foot. This is not my reconstructed ex-tumor-ridden right foot. I’ve had pain now for about 8 months, so the doctor had me get xrays. He called me Saturday and told me I need an MRI to rule out a stress fracture or whatnot as there is a weird white line or somesuch on the xray. This line has gotten bigger since a random xray I had last May. That xray was to check on my reconstruction in the right foot and they only took an image of the left for comparison.

Then Saturday afternoon my two boys lay together in a bed on the counter.

Are Perry and Felix not the cutest guys?! Felix has that expression because when Perry lays with him he always says to me, “What fresh hell is this?” a la Dorothy Parker.

I have primary lymphedema in both legs, and I use a compression pump–or am supposed to–to flush out some of the excess fluid. I hadn’t used my pump in a long time because I’m so tired at night and it takes a couple of hours, but I decided to last night. I didn’t put Perry in his room. Big mistake. While I was trapped on the machine, he started “instigating,” and he ended up knocking over our good lamp, shattering the light bulb and breaking a big chunk out of the side of the lamp. In the photo look at the right side of the lamp and you can see the white line at the start of the hole.

The gardener searched for the broken pieces of the lamp and tried piecing it together while I swept up the light bulb and made sure the floor was safe for little cat beans.

Then I hooked back up to pump my legs, while the gardener started watching TV. Less than two minutes later, he was sick. Without going into all the details, I will say he is still ill and we don’t yet know what is wrong.  Because when it rains it pours, I received two separate rejections for poems since Saturday night. Yup.

(Update: The gardener is suddenly starting to feel better!)

So I am going to close comments and leave you with a favorite poem (that I dug out to show Theresa Barker when she visited Phoenix. WordPress won’t allow correct formatting, but I think this is close enough to give you an idea of the poem.

SO I SAID I AM EZRA

So I said I am Ezra

and the wind whipped my throat

gaming for the sounds of my voice

I listened to the wind

go over my head and up into the night

Turning to the sea I said

but there were no echoes from the waves

The words were swallowed up

in the voice of the surf

or leaping over the swells

Over the bleached and broken fields

I moved my feet and turning from the wind

that ripped sheets of sand

from the beach and threw them

swayed as if the wind were taking me away

As a word too much repeated

falls out of being

so I Ezra went out into the night

and splashed among the windy oats

that clutch the dunes

Filed under #writerslife, Cats and Other Animals, Nonfiction, Poetry, Writing

Tagged as A. R. Ammons, cats, Nonfiction, Poetry, So I Said I am Ezra

Cats and Dogs and Poems, Oh My! And Mysteries, Too!

The American Academy of Poets welcomes in Women’s History Month (March) with this list of poems:

That first poem is a “rewrite” of a famous John Donne Holy Sonnet Batter my heart, three-person’d God which is one of my favorite poems. What do you think about what Day did with the Donne poem?

I do have an update on my cat Tiger and the test for pancreatitis. Her test is at the very high end of normal. That result, coupled with her other out of whack test results could mean that she has an inflammation of the pancreas. The question is whether she has an inflammation that can improve, but has started a slow decline (kidney disease, for instance) because of her age (15)–or if it’s the beginning of a very serious disease. She is asking for prayers and healing vibes. OK, I am asking on her behalf, but she does want them! 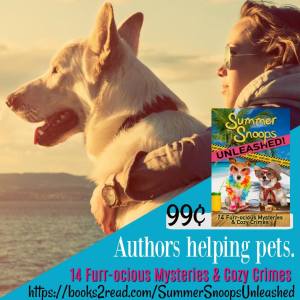 Here is a cool reading opportunity, as well as an opportunity to help shelter animals, at the incredible bargain price of $.99! That’s LESS THAN A DOLLAR, FOLKS! One of the recipients of the funds is Home Fur Good, the shelter where I volunteer!!!!!!!!! An all-female group of cozy mystery writers wrote a story collection which is available for preorder now through the following sites.  Summer Snoops Unleashed.  Each story is the length of a novella, between 15,000-30,000 words.

Preorder it now because: All the royalties from pre-orders will be donated to the Rescues. Royalties collected after release will go to help authors defray the cost of publishing and marketing. So the time to buy is NOW!!!! I just purchased mine through Apple iTunes! 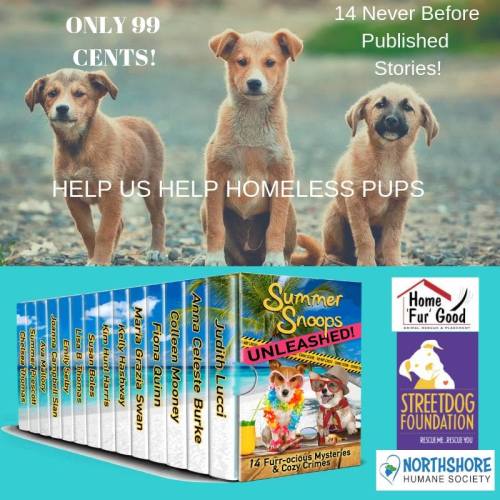 Maria Grazia Swan is a mystery writer who also volunteers at Home Fur Good. Her story is included in this collection. Maria has published several mystery series, and they are wonderfully written, fun cozies, featuring dogs and cats.

Lastly, a lil ole reminder about Kin Types as a good addition to Women’s History Month.

“Kin Types exhumes the women who have died long ago to give life to them, if only for a few moments. Through genealogical and historical research, Luanne Castle has re-discovered the women who came before her. Using an imaginative lens, she allows them to tell their stories through lyric poems, prose poems, and flash nonfiction.”