How long have I been examining memoirs to see what I learned?

I just went and looked up the answer. I started these at the beginning of January of this year. It feels as if I have been doing it longer, but that is still over a half-year. So I must have written at least 26 memoir review posts!

How is it that I haven’t yet written about Mary Karr’s books? I will admit that my omission has been on purpose. I find it so daunting to talk about her books. She is the memoir writer I most look up to, both for her first memoir The Liar’s Club and for the trilogy (The Liar’s Club, Cherry, and Lit).

When I first started reading memoirs on purpose, I read Jeannette Walls’ memoir The Glass Castle and Mary Karr’s The Liar’s Club. They were both stories with narrator voices that appealed to me and both about the experiences of little girls growing up in trying circumstances. 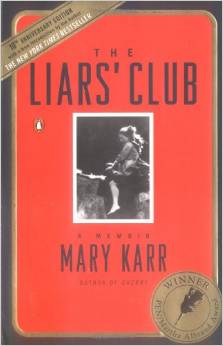 These two writers unintentionally persuaded me that I had a story to tell, as well.

Mary Karr’s book is a great one to use as a model for a coming-of-age memoir. If I were teaching a course in that type of memoir I would certainly use The Liar’s Club as a text.

To say that Karr’s story is that of a girl and her older sister growing  up with alcoholic parents would be to greatly simplify and reduce a great work of art.

Since I could spend days writing this post (and I can’t do that and you wouldn’t have time to read it anyway), let me focus on a couple of points.

The book opens with 7-year-old Mary being questioned by her family doctor in her family home. Something is terribly wrong. He’s very gently asking to examine her, but she’s formed her nightgown into a protective tent. Karr’s descriptive powers and use of figurative language create scenes for the reader to actually inhabit with the narrator/protagonist. She knows just how to suck the reader into her life in a small blue-collar town in Texas, circa 1962. She goes on to use this method, as well as flash forwards and flashbacks, to tell her story. She also centers the narrative around certain years in her life, rather than trying to cover her entire childhood. And she introduces her father’s storytelling to add texture and an enhanced viewpoint to the story.

Karr also plays with tense in this book. For example, in the middle of the book, she describes her mentally ill mother as looking on one particular day like Anthony Perkins in the movie Psycho. But she’s not content to just make the analogy. Instead, she says:

Mother’s back to me in that rocker conjured that old Alfred Hitchcock movie Psycho she’d taken us to in 1960. In the end, the crazy killer was got up like his nutty old mother with a gray wig. He rocked in her personal chair. Mother turned around slow to face me like old Tony Perkins. Her face came into my head one sharp frame at a time. I finally saw in these instants that Mother’s own face had been all scribbled up with that mud-colored lipstick. She was trying to scrub herself out, I thought. Sure enough, the scribbles weren’t like those on an African mask or like a kid’s war paint. They didn’t involve the underlying face that much. They lacked form. No neat triangles or straight lines went along the planes on the face. She looked genuinely crazy sitting in her mother’s rocker with the neatly ruffled blue calico cushions in front of that blazing stove with the smell of charcoal fluid and her own face all scrawled up bloody red.

And from that moment on, Karr switches scenes and tenses at the same time, “Then we’re in the lavender bedroom I share with Lecia.”

If you don’t watch for the tense shifts you won’t notice them, but they add intensity as if a camera is zooming in and out of the subject.

If you haven’t read The Liar’s Club, what in the world are you waiting for?!

39 responses to “The Truth-Teller’s Club”