Getting All Out of Art

When we visited New York in October, we saw this sculpture: 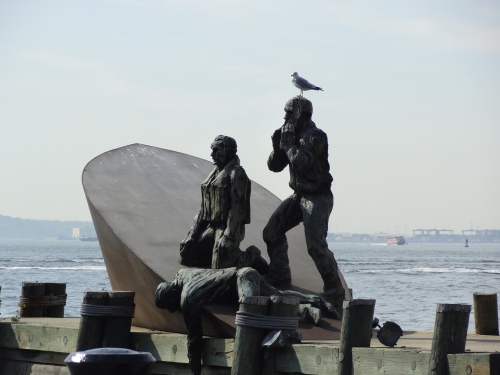 I didn’t really understand what it was, although there was a sign that said it was the Merchant Mariners’ Memorial at Battery Park. I thought it was amusing because of the bird perched on the guy’s head.

Tourists were in front of it, snapping photos, and I had a hard time getting an angle I wanted.

And there was a fence around it, too.

I was with hubby and daughter and we walked on through the park. After all, we could see the State of Liberty and Ellis Island. I don’t know much about Merchant Mariners other than:

Daughter has been visiting (and has to leave today BIG SOBS). She’s packing right now. I just ran across these pix and wondered more about the sculpture. A lot of effort and money goes into these public art projects, so what is this one about? 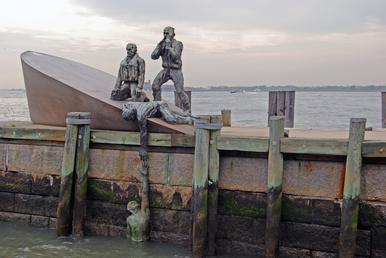 American Merchant Mariners’ Memorial, designed by the sculptor Marisol Escobar, is located just south of Pier A on a rebuilt stone breakwater. It is a representation in bronze of four merchant seamen with their sinking vessel after it had been attacked by a U-boat in World War II

These men were drowning after a Nazi U-boat attacked their ship. And look how powerful it is. Why is it so blocked now that you can’t get the effect of this drama? A beautiful work of art, but because the “setting” or “context” is no longer correct for it, much of the meaning and beauty is lost.

Like a diamond needs the right setting and a painting needs the right placement, does writing need the appropriate context, too? Are there ways that the full expression of a book, story, or poem is lost because the context has changed? Or is writing something that we can always access in just the way someone did 20 years before? or 200? What do you think?

35 responses to “Getting All Out of Art”