Across the Country Back toward the Civil War

After seeing our daughter in New York, we traveled northeast–farther northeast than I had ever been before. Unfortunately, both the gardener and I got sick, possibly infected by the 10-year-old Typhoid Mary I sat next to on the plane ride to New York. Rather than flying to see my mother when we had planned, we started driving southwest, in the general vicinity of home, hoping that eventually we would be well enough to fly without cracking our ear drums. (This was upsetting because my mother is having knee surgery soon, and I don’t get to see her now before the surgery).

Before we turned back, though, we did see some sights that engaged my imagination.

I found this little gem in Searsport, Maine. It’s a Masonic AND Odd Fellows lodge, built around 1870 in the downtown area. It houses a Civil War memorial.  My iPhone cut off part of the memorial, but I am so interested in old building architecture, as well as Masonic temples and lodges. I’ve been thinking about starting a Pinterest board for the Masons.

All these little towns ending with the word “port” are very charming, old, and generally not very updated. Since I’ve lived so long in the southwest, it’s very refreshing to be around this “antiquity” (I can hear European readers snickering). But it was almost disconcerting to be around so few chain restaurants and big box stores. I mean, that is almost all there is in Arizona and southern California.

We made it to Canada and stayed overnight in St. John, New Brunswick, a city with a fairly depressed economy over a length of time, from the looks of it. But this, of course, leads to a wealth of interesting old architectural details. Of course, we were driving, and I didn’t get too many photos. And if I did take any, I can’t find them.

Out in the middle of nowhere we stopped at a cafe/convenience store with a little rest stop building on its property. They sold a great variety of types of jerky, but the overall look of the place and the pale skinny girls who worked there made us wonder just which horror movie set we had stumbled onto.  There was a Sweeney Todd atmosphere throughout the property. 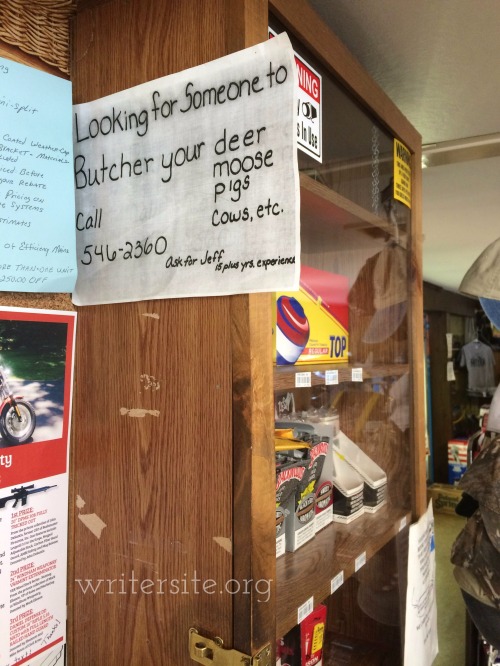 We stayed at Bar Harbor, Maine, before we turned back and headed south. It’s a small town, so it only took 20 minutes in the ER to get my pack of antibiotics! 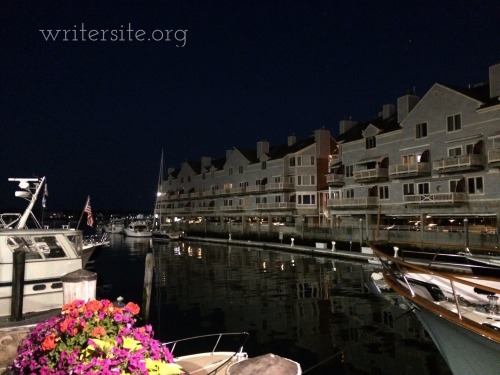 We enjoyed our first time in Louisville.  But it was one of the more thought-provoking visits from a historical standpoint. The Ohio River separates Kentucky from Indiana at Louisville. Having read and taught a lot of 19th century American literature, I’ve read of the importance of the Ohio River to slaves who were trying to escape to freedom. If they could get across this river, they would reach land upon which they would be free. When you look at a map of the United States and see how far north the south actually ranges, you can grasp the magnitude of the journey that some slaves set out on. There is a whole lot of country south of Louisville!

Actually, the situation with slavery laws was more complicated than what I just described, but literature has managed to distill the situation down to this simple image.

Uncle Tom’s Cabin presents the image most compellingly when Eliza crosses the river to get to Ohio (rather than Indiana, but similar idea). She wanted to take the ferry across, but then she sees a slave trader and must grab her young child and flee.

A thousand lives seemed to be concentrated in that one moment to Eliza. Her room opened by a side door to the river. She caught her child, and sprang down the steps towards it. The trader caught a full glimpse of her, just as she was disappearing down the bank; and throwing himself from his horse, and calling loudly on Sam and Andy, he was after her like a hound after a deer. In that dizzy moment her feet to her scarce seemed to touch the ground, and a moment brought her to the water’s edge. Right on behind they came; and, nerved with strength such as God gives only to the desperate, with one wild cry and flying leap, she vaulted sheer over the turbid current by the shore, on to the raft of ice beyond. It was a desperate leap—impossible to anything but madness and despair; and Haley, Sam, and Andy, instinctively cried out, and lifted up their hands, as she did it.

The huge green fragment of ice on which she alighted pitched and creaked as her weight came on it, but she staid there not a moment. With wild cries and desperate energy she leaped to another and still another cake;—stumbling—leaping—slipping—springing upwards again! Her shoes are gone—her stockings cut from her feet—while blood marked every step; but she saw nothing, felt nothing, till dimly, as in a dream, she saw the Ohio side, and a man helping her up the bank.

I’ve looked everywhere for my river photos, but they have mysteriously disappeared. If Eliza had tried to cross at Louisville, where the Ohio River is a full mile across, she never would have made it.

Talk about a liminal space: the river between life and death, between freedom and shackles. 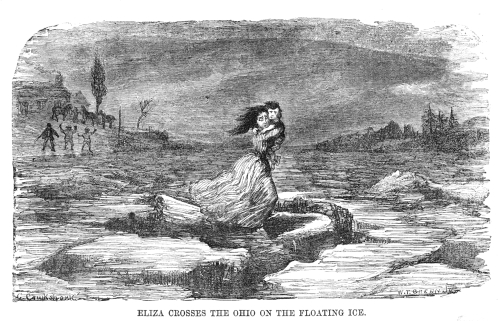 In case you’re wondering why Eliza appears white in the illustration, she was supposed to be biracial with light skin.

Have you ever read Uncle Tom’s Cabin? Have you avoided it because you heard it was racist? Why don’t you read the book for yourself before you decide that. The book is taught on college campuses because it’s a very important book in the history of this country. It helped bring about the abolition of slavery–and that was the intention of the writer, Harriet Beecher Stowe.

Tom is presented as a Christ figure, but is seen as meek (rather than godly) by critics of the book. Where the book truly goes awry, or odd, strange, peculiar, is what happens to a couple of the main characters in the last part of the book. It’s about something called “colonization” that was part of the abolition movement of the time period. That’s something you don’t hear about too often when you visit museums where the abolitionist movement is revered. Read the book and see what I mean!

OK, you can see that the Civil War came up more than once in my mind on this trip, and that is something that can only happen when you travel in areas where history actually happened. I get a little hungry for history living out here.

29 responses to “Across the Country Back toward the Civil War”