The Baby’s Tail: Part 1 of The Caterbuddy Tails (apologies to Chaucer)

I get to go first because my mom says I’m her BABY. The other cats want to tell their stories, but I’m first first first!

My name is Perry.

I love love love my mom. She says we’re best friends! I show her I love her by wrapping my front legs around her neck and licking her ear and neck. She pretends she doesn’t like it, but I know she DOES!

My dad is cool, too, and sometimes I lie next to him on the couch, but only for a minute because it’s hard to lie still for so long!

Before I came to Mom and Dad’s house my life was really hard and my tummy often empty, but I try not to remember those days out on the street.

I was so scared when I was at the shelter. They tried to stick needles in me and grab at me. It was loud with bright lights so I hid in a little cave Mom bought for my cage. I didn’t know yet that she would be my mom, but I knew that I was only happy when Mom came every day to read to me about Curious George. The people at the shelter thought I was the opposite of George—boring and uncivilized and uninterested.

So my mom brought me home and held my food bowl while I ate. She read to me several times a day and sang me songs. She recited poems to me. Toys and stuffed babies surrounded me, too, and Mom taught me how to play games. Pretty soon Dad started to play games with me. He talked to me a lot when Mom wasn’t around.

One day, I realized that I would be with Mom and Dad forever, and I was so happy.

I try to make friends with Felix because he’s the only other boy, so I grab him in a “bear hug” wrestling hold, but he lies there like he’s dead. BORING!!!! Boring boring boring. So instead of playing with him, I have to chase him out of his bed a few times a day just so he knows I’m here.

Kana is the other cat I try to make friends with because she’s the dominant cat. Hahaha. Until I got here, I mean. If you know what I mean! She’s a big sleek black panther girl, and we could be best friends if she wasn’t such a you-know-what. It’s what you would call her if she were a dog. Get it?! Kana has a short temper, and when I try to lie in her bed with her sometimes she gets mad. Or if I “share” her kibble one time too many. Then we sit on our butts and slo-mo throw our punches. Mom says sometimes I bug Kana too much, and she puts Kana in the laundry room with kibble. She says it’s so Kana can get some private time away from me. I try not to let it hurt my feelings, but I don’t really get it.

Although I get along fine with some of the other cats, these are my two favorites. They are the only ones I lie next to in the same bed. We three are the ones mom calls THE BIG CATS.

Tiger, one of THE LITTLE CATS,  likes to parallel play with me sometimes. We bat at the same mobiles. She’s a nice little calico girl, but she’s not really in my category, ya know? OK, I admit it: if I get too close, she hits me with her claws out. I kind of avoid getting too close. But we’re cool.

Sloopy Anne looks just like Tiger, except she has a black face instead of a tabby face. If I see one of these girls slinking around a corner, I don’t always know which one it is. Sloopy Anne waits for me to come out of my bedroom every morning so she can chase me or show me her claws. But after breakfast, I chase her under the chest in the living room. Sloopy Anne is a LONER, but she’s ok.

That leaves the old lady. Not Mom. That other old lady, Pear Blossom. She lies on the back of the couch ALL. DAY. LONG. She won’t tolerate me trying to play with her. She gets crabby, but doesn’t stay mad long. She just loves Mom and likes to sit on Dad’s lap. To the rest of us she is always saying: don’t annoy me. She’s not that much fun.

This last  month, though, there’s been some excitement in our house. My human sister is here with her cat Izzie! Izzie is SO much NICER to me than the other girls. She kisses me and lets me eat her kibble. She doesn’t act annoyed by me either. I wish my sisters were as nice as Izzie!

Life is so wonderful! I don’t have to worry about the heat and snakes and coyotes and storms. Or the big bobcat. I get smelly food twice a day—and treats at bedtime! And pets and hugs all day long. Not too many strangers either. I don’t like strange humans. My Mom says I am just like Curious George. I get into her purse and the kitchen drawers and climb between her arms when she’s cooking. I eat her mail, even the checks! I always want to be in the middle of what’s going on in this place! And my Mom and Dad LOVE me, and I LOVE them!!!!!! 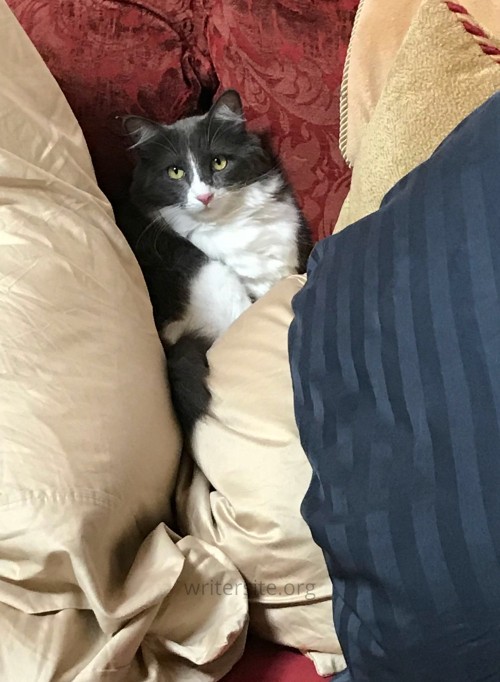 THIS IS ME HIDING FROM MOM AND DAD TO TEASE THEM!

50 responses to “The Baby’s Tail: Part 1 of The Caterbuddy Tails (apologies to Chaucer)”