The Kitchener’s Tail: Part 5 of The Caterbuddy Tails

Luanne: Felix, please tell your story to my friends. They have heard from Pear Blossom and Tiger and Sloopy Anne and Perry. But you and Kana have not yet told your stories. I need to coach Kana a bit on how to tell a public story, but you should be fine. Just tell it how you remember it. How you know it.

Luanne: Sure you can, Fefe.

Luanne: You’re so big and strong. Why are you afraid to talk about yourself?

Luanne: OK, you tell me the story. I’ll write it down and then I’ll share it that way. Nobody will ever see you. We’ll negotiate photos later on.

From Luanne: What follows is the story that Felix told me about his life. This story was being planned when Felix suddenly became ill last Wednesday. I was out of town for work in California, and when the pet sitter was watching him (thank goodness this happened when she was at the house). After he ate dinner, he threw up ten times, began panting, and made frantic runs to the litter box. She mistakenly thought he was constipated. I have made this mistake myself in the past when Pear started having UTIs. Rather than wait until my daughter could take Felix to the vet, I had the pet sitter drop him off at the vet as she left my house. It was a good thing that I didn’t decide to wait, thinking it was only constipation.

And a good thing that my vet decided to examine him before my daughter could get there. His bladder was the size of a grapefruit. He had a urinary blockage, which is a common emergency in (particularly) male cats, and fatal if not treated in time. It ended up that my daughter took him from the vet to the hospital because after they catheterize him he would need 24 hour care. He was in the hospital for three days. Now he is home, and I am watching him round the clock because there is a high possibility that he could re-obstruct within two weeks after the initial blockage. Felix is never any trouble except when he’s sick. In the past, it’s been parasite issues that stemmed from his life on the streets. This was the biggest emergency I’ve had with my cats, except for Mac’s end of life issues. And I wasn’t even home with Felix. The nurse who checked him out said that he was “famous” at the hospital for being sweet and soooo affectionate. 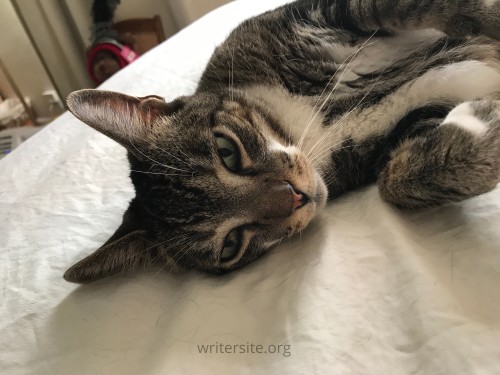 People think I’m scared, but I just don’t like confrontation. When I lived out there, you know, I tried to stay away from cats and other animals that wanted to fight me. I’m a lover, not a fighter. Remember when I ate in your front yard every day, Mom? You knew I didn’t have a home and you and Dad were giving me food so I didn’t starve! Then I started hanging around with your dog Sandy in the backyard because he was a lover, not a fighter, too. He told me all the stories about his good life in your house. So I began to stick close to your yard, hoping you’d bring me inside, but not wanting to make a mistake in case Sandy was wrong. What if you didn’t like cats?

Then I saw Mac in the window. I knew you liked cats, but would Mac like me?

I let you trap me in your garage using that silly “pull the string and the kennel door will shut” so-called trick. It never fooled me, but so be it.

You brought me to your friend, the emergency vet. That’s when we lived in California. Remember, Mom? She told her staff to be careful when they opened my kennel because I might be feral and mean. When she put her hand in my kennel herself (she doesn’t take her own advice), I rubbed against her hand. I’m a sucker for pets and rubs and scratches.

What? Oh, you want to know what my life was life before I came to live with you? It was kind of hard, especially when it was over 100 degrees in the summer. I got dumped by the people who fed my cat mother. There were too many of us, they said.

When you brought me into the house you let me live in the bedroom upstairs with the TV for two months. I didn’t meet my human sister for a couple of months because she had just started college and you and dad were what you called empty nesters. So you two watched TV with me every night while I was in that room. We had fun, and I didn’t have to meet Mac or Pear.

After I met them and moved into the rest of the house, Mac was kind of mean. Sometimes it irritated my good nature, and we would have tussles, even pull out each other’s fur. Pear was fine. She just ignored me. But a few weeks later, we all moved to Arizona. I was so scared. I wouldn’t eat for three days, and you had to give me special medicine because. Remember, Mom?  Huh? Remember? But after that, Mac and I were friends. Mac, Pear, and I were all close from that time on. We slept on 3 beds on the kitchen counter like three little kittens. The ones who lost their mittens. But we hadn’t lost anything. We had found each other. Mac was my hero.

That was the start of my kitchen life. Once I moved into this kitchen with the long counter I never wanted to go anywhere else. The only times I’ve moved into the closet upstairs is when your dad would visit. Remember Mom? He had such a loud voice? I couldn’t listen, so I lived on the shelf in the closet while he was here. He never comes any more, but when Grandma comes now by herself I stay in the kitchen and she calls me “Mr. Big Eyes.”

You and Dad and my human siblings call me Fefe. And, Mom, you call me Feeferelli and Mr. Scoobydooby Man. You call me The Kitchen Cat. You call me Feef a lot. I love to crawl into your lap when you’re at your laptop at the kitchen desk.

But I don’t watch TV with you and Dad and the other cats. I like my basket in the kitchen. I have a window to the beautiful yard Dad created, and a nice cool sink to lie in for a change. I’m also very close to the food. When the other cats are done eating their breakfasts and dinners, I like to finish up their food. I eat a lot, but I really am a big boy with lots of muscles. And lots of love. I’m not shy. I just don’t like confrontation. I’m a lover, not a fighter. 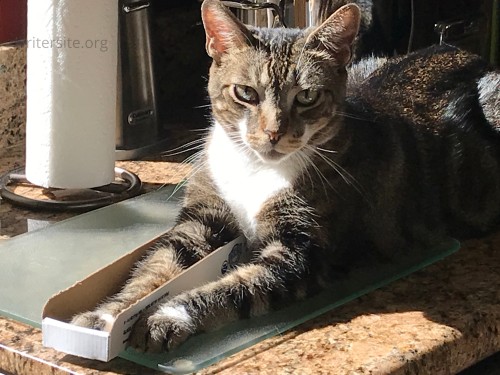 51 responses to “The Kitchener’s Tail: Part 5 of The Caterbuddy Tails”