Memoir Gaps: Filling in the Blanks

I have always carried a lot of clear and strong memories with me, especially from my childhood.

But when you go to write a book-length memoir you need more than those memories–you have to remember what happens between those vivid images, to recreate the glue between them, in a way.  Sometimes searching backwards for the hazier recollections and the forgotten events seems as if I’m trying to get into a boarded-up old building. 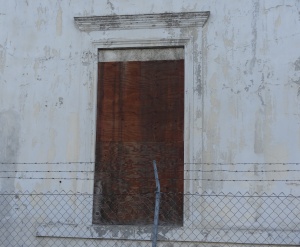 William Zinsser, in Writing About Your Life, says that the way to write a memoir is to start with those vivid memories, writing up one each day.  Then he makes a giant leap to the assumption that by writing those recollections the writer will discover her own writing style, as well as what is important and what is less important–in fact, that the writer will discover what her story truly is!

Hmm, that’s great, but then he dumps us off at the curb, without any directions on where to go from there.

That’s the place where I began to flounder and, although I’ve worked very hard at finding my structure, my story-and my direction–still have difficulties.

After many efforts and revisions, I have the beginning chapters of my book and a rough idea of the rest of the structure.  But as the story moves on, I need to work on the glue between the vivid memories.  This is true more of characterization than anything else.  Particularly since in my childhood memories I was . . . a kid.  I didn’t see the adult characters in my life as the round and dynamic* people they are.  And I didn’t see myself as a round and dynamic character either–not clearly.

That’s why I am using other methods to try to fill in some of the blanks.  One of these methods has been studying psychological aspects of the characters, such as the HSP and Myers-Briggs analysis I wrote about.

Another method is to write an imaginary scene which shows a reason why someone did something.  For example, when I was in 7th grade I was sat on and beaten by a fellow classmate.  I was imprisoned underneath her because she outweighed me by more than 100 pounds.  I have no idea why she would do something like this, and I remember feeling the unfairness (actually, I felt squished, too).

To get insight into her personality and motivations, I wrote a scene which results in the beating.  The scene is fiction, and I can’t use it for the book (and don’t want to share it ;)), but in writing it I learned more about the girl and myself as characters.  It’s when I do research in this way that I frequently have little epiphanies, where I learn or remember things that I didn’t know I knew.

* round characters are seen as fully-dimensional human beings, whereas flat characters tend to be one-sided