The Trick the Cat Learned

I’m writing this between Canada Day (this past Saturday) and Independence Day (tomorrow). Happy belated and future celebrations, y’all, you guys, youse, you’uns, and however you pronounce that direct address in Canada.

A brief update on Perry today. Since he was on his own for whoever-knows-how-long, he doesn’t like me to touch his head or his back, and he spends some of his time under the bed (and the rest on the bed or in his cat tree), but he is certainly learning his lessons well because I taught him a trick.

Here he is on the bed (that has lots of layers of covers on because of the deworming). By the way, today is dose #2. 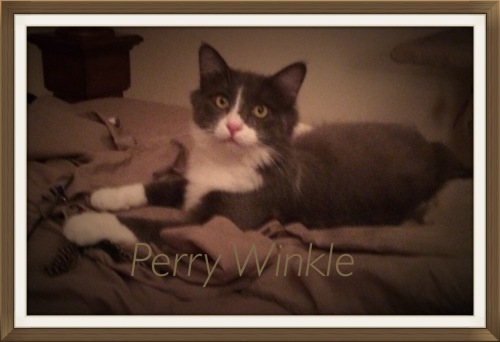 So is Perry feral or not? My guess is that a lot of people would have automatically classified him as feral, but that he was somewhere on the continuum between socialized and feral–and that with some effort he is moving over toward the socialized side. It’s nice that he likes to lie on the bed with me to watch TV, likes to play with me, and taps my hand with his paw every time I ask.

I am reading the 2nd set of galleys for Kin Types. With an uptick in work lately and spending time with Perry, I stopped writing again. Ugh. I need to find a routine that works. Maybe writing in the bedroom with Perry? But that would be ignoring him!

68 responses to “The Trick the Cat Learned”