Out of the Laundry Bag onto the Fort

Did you build a fort when you were a kid?

Years before my father built my playhouse, even a few years before he built the bomb shelter in our basement, I was constructing my own forts out of sheets.  They sprouted in our living room, my bedroom, and in the neighbor’s basement.

I would drag chairs and small tables close enough to heavy furniture that sheets could be draped from one object to another to create walls and a ceiling.

In the best interests of my book I actually built myself a fort yesterday.  I covered the kitchen table and chairs with sheets and crept inside with a pillow and diet Coke.  What I learned is that two of my cats were curious and came inside with me, but decided to leave right away, and two of them skedaddled in terror.  And I learned that my knees aren’t doing so hot.

In the days when I didn’t have those issues, my mother’s laundry provided the ability to make forts.  Her hinged type clothespins held the sheets to the furniture. 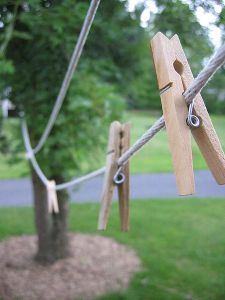 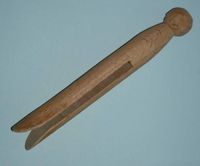 In my mother’s canvas clothespin bag, the majority of the pins were the standard version, and I had to really hunt to find enough of the hinged sort.

As I worked with the sheets, they billowed up with a whoosh and, if it was summer, the outdoor scent blew off the fabric.  In the winter they smelled musty from the tightly packed narrow linen closet.  When I got my sheets all clipped to the furniture, I had a tent which sometimes was just one “room,” or if I was lucky enough to get hold of more sheets and had a friend to help me, might be a multi-roomed tent.

Children have very little privacy.  Having my own fort gave me the illusion of privacy, even if it was only to lie in there and sigh at the light filtering in through the thin percale or snicker at the muffled sound of my mother yakking on the telephone in the next room.  A special treat was if my mother let me eat my grilled cheese sandwich and carrot sticks inside the tent.

It might be that children’s forts make children feel safe because they provide a feeling of control.  The child cannot be seen by others, but she can peek out at will–even spy.

When I was older, at least ten, we built a fort in the empty field behind our house.  The field had natural hillocks and valleys, and my friends and I chose the deepest indentation and dug it out deeper.  This took hours of callous-building work with Dad’s army shovel.  Then we collected scraps of old wood from the city dump on the other side of the field and fashioned a crude cover for the opening.  We left a narrow space to peek one head above the surface, as if we had a human periscope.

Apparently children are still making forts out of their environment.  The other day a friend ran into a charming fort on her walk through the woods.

Filed under Creative Nonfiction, Memoir, Research and prep for writing

14 responses to “Out of the Laundry Bag onto the Fort”