Memoir and the Cast of Characters

On Saturday I posted my plan to work on characterization for my memoir Scrap during the month of March.  One fellow blogger, Mike from Fugitive Fragments  wrote an interesting comment:

“It occurs to me that in writing the character for self in a memoir one risks sacrificing truth and honesty. Surely it is more authentic to use your own voice?”

I wrote back a rushed answer:

“Mike, thanks for a great comment! I actually think it’s just the opposite. People don’t often present a really truthful portrayal of themselves when they begin to write memoir. It’s only when you really know yourself well enough that you can be honest. And if you’re writing a story which occurs over a long period of time, you have to know different versions of yourself, depending on your age. I have been working on this book for four years and am still digging into things, especially myself!”

It seems like a good idea to explain a little bit about how I see the genre of memoir and the role of characterization in memoir.

Memoir is a crafted story about one part of the writer’s life.  If you write creative nonfiction, you probably know that it’s not like autobiography which is meant to be a chronicle of the writer’s life from birth or family origins to the present moment, generally told in chronological order.

The story can be focused on a certain thread or element of a major portion of the writer’s life or it can be about something which occurred over a short period of time, such as a trip to Singapore, or a dramatic event, such as a personal story about 911.

The writer tells her story through the viewpoint of the narrator who is a portion of the writer herself.  The complexity of a human being cannot be re-created on the page, and in order to keep the focus on the story being told, only those elements of each person which are important to this story are incorporated into the character.

For example, my book is about my relationship with my father, how it has affected me, and some elements of his life and his mother’s life which are intertwined with my own story.  The fact that I have a doll collection and can place my hands behind my back in prayer position (reverse namaste) probably will not come up in this story because they have little to do with it. 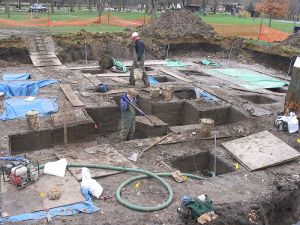 Mike is right that in memoir it is important to be truthful and honest, writing in an authentic voice.  My ideas of how one does that probably differ from Mike’s.  By just “writing in my own voice” (quotes are mine) and seeing where that will lead me is not crafting a story that is true to my experience.  I first have to be my own archeologist, excavating or digging deeply in order to understand myself, my reactions, and to see the connections of my life clearly.

When I began working in the genre of memoir (my genre had been poetry) four years ago, I didn’t really understand the difference between the events of the story (what happened to me in the past) and the practiced, reflective mind of the present day narrator (me in the here and now).  Both these aspects of the story are important to memoir.

Through work on this project my understanding of myself has increased.  My understanding of my father and grandmother has increased, as well.  The result is that I am processing the destruction of the past (point A) and allowing the appreciation for the blessings to permeate the damaged tissues of our relationship (point B).  My story shows how I got from point A to point B.

The creation of the narrator’s character–the sifting through and selecting what personality traits and experiences to include–is similar to the creation  of the rest of the cast–the other major characters.  In addition to the narrator, also known as the protagonist, there can be allies and adversaries.

This is the cast of characters for my book:

Narrator—an introverted, inquisitive girl who loves books and comes to believe she hates her father.

Daddy/Dad—an emotional, enterprising man who grew up in a household headed by his single mother.  Unfortunately, he is controlled by anger larger than himself.  This major character seems to be an adversary (another adversary is the Secret).  Can he also be an ally?  Only time will tell.

Mommy/Mom—a fragile, incurious woman who marries and has children too young, she struggles to become her own person.  She is a major character.

Grandma—a stern and hard-working single mother who has bravely and rigidly raised her children through the Great Depression and into the 1950s.  She is not herself an ally or antagonist, but she does represent a non-human antagonist as she is the keeper of the Secret which the protagonist needs to discover.

Husband–a major character who is a helper and confidante for the narrator in her struggles.  This character is a strong ally, but is not a fully dimensional character as he is in the book for his role in this story, not as the complete person he is in real life.

There are a few minor characters, such as brother, son, daughter, and friends.  Many will be dimensional characters, but not as complexly presented as the major characters.

If you write about your own life, what does your cast of characters look like?  Can you identify the adversary and allies of your story?

9 responses to “Memoir and the Cast of Characters”