It’s true that I own a lot of books. I don’t like the word hoarder, but once a book comes into my possession, I don’t care to give it up. I take good care of them, so why shouldn’t they gravitate toward me?

I don’t steal books, though. When I borrow a book from a friend, I put it in a large Baggie so that I don’t damage the cover, and I eventually give it back.  I can’t say that for everyone who has borrowed from me.  You know who you are.

So it’s very unusual for me to damage a book.  That said, I own a book I have read far too many times, and it looks it.    I purchased my version of Sylvia Plath’s The Collected Poems at least two different book designs ago, probably in the 80s.  I’ve damaged this book by loving it–the spine is broken and sections of poems spill out by accident. Old post-it notes, marking poems I’ve studied or researched or just love more than the others, hang out the top. 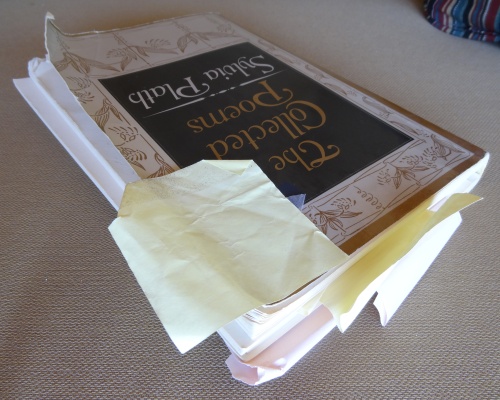 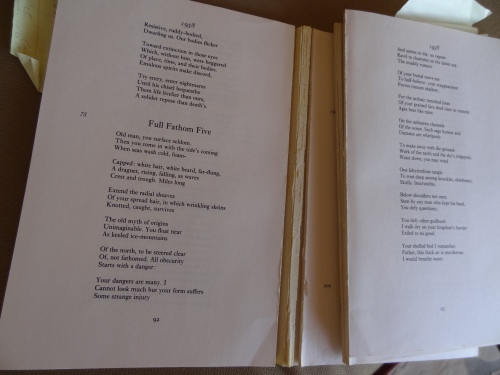 For my master’s in English, I explicated (def: rip apart with intentions to destroy an indestructible poem) a Sylvia Plath poem “Fever 103.”  At the time I was working on it, I found an old LP in the university library with Plath reading her own poems.  I also ordered earlier drafts of “Fever 103” from the Smith Library and discovered excised lines which tickled me no end.

Today the recording is readily available, but back then I felt as if I’d discovered the Holy Sylvia Grail.

Disclaimer:  I am not, nor have I ever been, a Plath groupie.  Thank you for understanding and accepting that fact.

9 responses to “For the Peanut-Crunching Crowd”