A memoir is usually focused on a specific thread or time period of a writer’s life, whereas autobiography is “my chronological life story.”

One of my favorite books is an autobiography that I would argue is a memoir because of its focus on the writer’s artistic life as an artist and writer. It’s a children’s book that is also a book for adults. 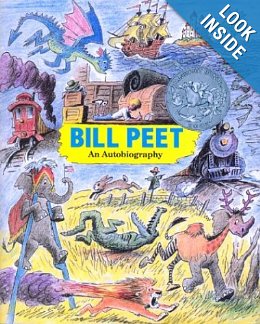 Autobiography for children and adults of one of Disney’s great illustrators, Bill Peet

The book is 190 pages–longer than a traditional picture book; however, it won an award as a Caldecott Honor Book in 1990 because the book is fully illustrated–there is at least one illustration on each page, along with engaging text.

Bill Peet worked for Walt Disney on many movies, shorts, TV shows, books–even Peter Pan peanut butter. He wrote the original (1961) 101 Dalmatians, working from Dodie Smith’s book. Disney asked Peet to “plan the whole thing: write a detailed screenplay, do all the story boards, and record voices for all the characters. That had been a job for at least forty people on Pinocchio in 1938, but if Walt thought I could do it, then of course there was no question about it.”

Throughout the book, Peet’s desire to pursue his own artistic endeavors is constantly at odds with first school and then his job at Disney. If you are an artist or a writer, you will feel that, in some ways, his story is your story.

In many great memoirs, readers learn about other characters in addition to the narrators. Peet’s book presents a complicated and somewhat frightening Walt Disney. The simplest disagreement could cause Disney to put an employee “in the doghouse,” and then other employees would give that person “the silent treatment.” He even shows a scene where Disney comes in to Peet’s office and unburdens himself about his own difficult childhood. While there isn’t anything in the book that isn’t appropriate for children, there is enough texture–enough “teeth”–to the book that makes for a fascinating read for adults, too. 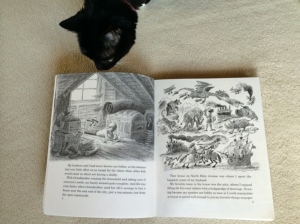 The illustrations are all by Peet himself, and you will recognize the classic Disney look. By the story, you will learn how much of Peet’s creations are part of that Disney look and of the Disney stories you or your parents have grown up with.

Something about this book stimulates my mind and my heart. I think I have a crush on the book. I love chatting about it.

What’s the Place of Capitalism in Book Publishing?

This past weekend we had house guests. A friend I hadn’t seen in a long time visited with her new husband. I hadn’t met him yet, but I knew he was a scientist who has been writing a children’s fantasy chapter book.

The idea is that, as a writer, you can aim for the highest quality writing or you can focus on writing what will sell. The implication is that these two goals rarely, if ever, overlap.

My friend’s husband thought a lot of writers want to be marketable because they need to make money from their writing. He argued that this goal is a manifestation of capitalism (which he favors), and that the market should determine which are the best books, the most deserving of being read. I would add he is also talking about democracy (although he didn’t say that) and that the vote of the reader will shape what will be read and published.

But should the number of readers be the main or only consideration for which books ultimately succeed?

Maybe if I look at the subject through visual art, I can see the issue more clearly. I love the old and new masters at the Metropolitan, the Louvre, the Uffizi, and the Courtauld. To be able to see a piece anew every time one sees it (or a representation of it) truly reveals the depth of the artistry.

But I admit that I love cels of Disney cartoon art. I love them for their imagination and because they resonate with the popular culture I grew up in. No way do I think they are art of the quality of a Renoir or a Picasso. And I don’t want to live in a world with only Disney cels. Or pictures of babies with angel wings (as cute as they are).

Autobiography for children and adults of one of Disney’s great illustrators, Bill Peet

So I think the idea of capitalism determining the books that are published and that we read can be carried too far because we still need deeper, more complex, and finely crafted literature, not just books that sell well.

Do you agree that capitalism should or will determine which books are published or do you think that high quality writing should be nurtured in other ways?

One of my favorite paintings at the Chicago Art Institute: Gustave Caillebotte – Paris Street; Rainy Day, 1877