I’ve been very busy caring for the kitties, especially Felix who requires a lot of meds and supplements and vet visits. But I did manage to write my reviews for the other two nonfiction picks. Click on the book covers to order from Amazon.

Ellie Presner’s memoir Surviving Hollywood North: Crew Confessions from an Insider was a fun fly-on-the-wall read, especially if you recognize some old film/TV that was filmed in Montreal. That is where Hollywood North existed: in Ellie’s hometown of Montreal. Ellie worked as a script coordinator for a decade during the heyday of Montreal’s film industry. Ellie had to be extremely organized, competent, and a grammar expert for this job. I had to laugh when she would assert her opinion over a word choice or idea with an arrogant screenwriter or bigwig. This high stress, fast-paced job seems to have been something Ellie could handle with aplomb, and the necessary adrenaline shines through in the voice of the book. Ellie’s jobs were all temporary because that is how it works in the field. Each job was created by the timeline of the film or of the season. Ellie tells the story of several different jobs, doling out behind the scenes gossip—mainly what she herself experienced or witnessed. Documents from Ellie’s work sprinkle the book, allowing the reader a first-hand look at the work. She also gives examples from her humorous work memos, designed to relieve stress for the staff. My favorite section of the book is her work for actor Patrick MacGoohan who was writing a screenplay for a movie based on his cult classic TV show, The Prisoner. I felt sad with Ellie at the end when she witnessed the last days of “Hollywood North.” You can find Ellie at her blog Crossed Eyes and Dotted Tees 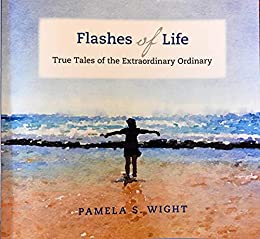 Flashes of Life: True Tales of the Extraordinary Ordinary, by Pamela S. Wight (of roughwighting blog) is a little gem of inspirational very short (flash) stories that explore the divine in everyday life. They remind me a lil bit of the “domestic farce” literature of Jean Kerr, Shirley Jackson, and Erma Bombeck, but more mystical than practical. I suspect because of the piece entitled “How Was Your vacation, Erma?” that Bombeck is a muse for Pam. But Pam’s approach to the material of the day-to-day life of a mom, wife, and grandmother is to look for what lies beyond, rather than in rigorously mining the humorous. Don’t get me wrong, there is a lot of humor in the book, but I am left more with a sense of awe for the majesty of life. For instance, in “Oxen Mystic,” Pam suffers a nighttime seizure in the bathroom when she’s home alone. Alone, that is, except for her dog Henry. He takes charge of her medical care, licking her and then covering her with his warm body, until she can crawl into bed three hours later. After Henry passes away, Pam still can feel his presence, even hear his “voice” in her ear. The storyteller of Flashes of Life is insightful, gentle, and open to each experience. While the book can be easily read in a couple of sittings and the essays are short, the book occupies a large presence in the heart and mind of the reader long after the last page. You can find Pam at her blog roughwighting.net