I actually took notes when I read Azar Nafisi’s memoir Reading Lolita in Tehran. The book contains so much information and so many thought-provoking quotes, I had to make it easy for me to find them later on. For what, I had no idea. but it seemed important. In reading this book, I felt as though I had entered a world foreign to me, but met a character in the form of the narrator who is someone familiar–a voracious reader and a teacher. 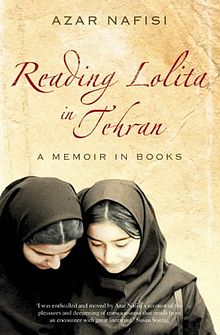 Nafisi’s memoir takes place when she, an Iranian moves back to Iran from the United States, where she attends grad school . She decides to go home at what turns out to be a time of change and danger–during the Revolution.

What starts out as a hopeful movement, becomes an authoritarian anti-Western repressive government. Nafisi witnesses the controls tightening as the abuse of power becomes more chaotic. She writes of men and women being tortured and killed, of women sexually abused and raped and blamed. The powerless are doomed.

Although she starts out teaching in the university, soon Nafisi is expelled for refusing to wear a veil. She comes back for a time, but ultimately, she resigns and takes her teaching underground. She teaches literature in her living room to female students. It’s very hush-hush as they are all in danger if discovered.

What did I learn from this book?

Although I ended up with  5 typed pages of valuable notes from this book, I remember one passage by rote. In the Gatsby section, a character says:

[The Great Gatsby] is an amazing book . . . . It teaches you to value your dreams but to be wary of them also, to look for integrity in unusual places. “

I’ve taken on this quote as a personal mantra.

I’m looking forward to reading Nafisi’s recent book Things I’ve Been Silent About. She lives and teaches in the United States, and this book sounds like a memoir about her childhood, growing up with parents who told her romantic stories.  This is her website.