A Medical-Nightmare Memoir, A Darkish Thriller with a Social Conscience, and A Brightly Lit Romance

I finished another memoir, this time one my mother recommended. Called Brain on Fire, it’s about a young journalist (Susannah Cahalan) who suddenly lost her mind. She suffered from symptoms which appeared to be mental illness, but were accompanied by seizures–her only actual provable “physical” symptom. After being wrongly treated by a neurologist who insisted she suffered from over-drinking (she was not a big drinker), she was admitted to the epilepsy ward at NYU. 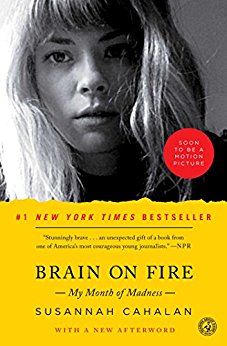 Her first stay was a full month and during that time she lost her mental abilities and, although she slowly recovered after her rare condition was corrected diagnosed and treated, she lost her memories of that month.

Because of her job and her position at the New York Post, Cahalan was able to publish an article about her illness that spurred the medical world into diagnosing others with the conditions. She wondered how many people were locked away in psych wards when they, in fact, had anti-NMDA-receptor encephalitis. How many people had unnecessarily died? In the few short years since her illness in 2009, the condition is diagnosed much more often–and lives have been saved because of her courage and her job and connections.

The book is important because of its spotlight on this particular rare illness, but also for how it shows that there is hope for other sufferers who have not received diagnoses or proper diagnoses. I went through a similar problem with original diagnosis for the tumor in my foot when the first specialist I went to, a “big name” doctor, ignored my concerns and misdiagnosed me in a way that could have led to me losing my ability to walk permanently. I suspect this happens more often than we know.

Another aspect of the book I found very intriguing was Susannah’s life stage. As a 24-year-old who had been living on her own, with an ambitious career job, she had just been moving into a “genuine” adulthood, but her illness made her dependent on her family and others. This is a difficult time of life to have this happen. Kid, adult, now kid again–or at least that was the way she felt.

Finally, she meditates on the loss of her memories at the end of the book, wondering if she will ever retrieve that lost month again. But she says about memory is true of anyone, and if she was a little older, she might realize that, too:

Maybe it’s [the memory of that month] not gone but is somewhere int he recesses of my mind, waiting for the proper cues to be called back up. So far that hasn’t happened, which just makes me wonder: What else have I lost along the way? And is it actually lost or just hidden?”

These are the questions of every memoirist.

I finally wrote a review of Carrie Rubin’s unique novel Eating Bull. If I had written it soon after finishing the book, my review could have been longer and more detailed.

I devoured (sorry for the pun) Carrie Rubin’s Eating Bull very quickly, although I savored it as I read. Then I didn’t write this review for many months. Perhaps because this book took me by surprise and just a tiny bit out of my comfort zone, writing about this book proved to be daunting. Eating Bull is a suspenseful thriller which showcases the dark world of the fast food industry and of fat shaming and bullying. It has a cast of characters I found very realistic–which means annoying and endearing at once. The protagonist, Jeremy, is a boy who deserves the sympathetic eye of Rubin’s narrator on his life and dilemmas. His mother frustrated me. She clearly loves him very much, but I wanted to step in and advise her on ways she could help improve her son’s life, but of course, I could not. Perhaps the most vivid character is Sue, the public health nurse, who teams up with Jeremy to fight fast food. Eating Bull is a very important book in the way it shines a spotlight on topics allowed to fester in our culture all the while the reader is obsessed with following the compelling story to a satisfying resolution.

What I realized about this novel, which Carrie says is in the “deep genre” (a genre I am not familiar with), is that the contrast of the real-life everyday problems of unhealthy eating (and an industry devoted to pushing it), fat-shaming, body image issues, and bullying with the excitement of a suspenseful thriller had to be digested carefully. It’s an amazing novel and should be put at the top of your reading list.

To offset the seriousness of those two books and to relax into your comfort zone of a romance in a delightful small town, remember to pick up Jill Weatherholt’s Second Chance Romance. This is the same review I linked to a week or two ago.

A charming story of love and light, Jill Weatherholt’s first novel Second Chance Romance is published by the Love Inspired imprint of Harlequin. According to the website:

“You believe hearts can heal. Love Inspired stories show that faith, forgiveness and hope have the power to lift spirits and change lives—always.”

I’m not used to reading in the genre of Christian fiction, and I was eager to try something new. If you think that everything is puppy dogs (there is a puppy, happily) and rainbows in Weatherholt’s book, you will be astonished. Melanie, a divorce lawyer from D.C., has lost her faith and hope in the face of horrific tragedy. A resident of Sweet Gum, handsome single dad Jackson has been touched by darkness in his life, too. But he’s been able to hold onto his faith.

Events transpire that first set Melanie and Jackson at odds and, later, try to prevent them from finding love together. The reader is left in suspense until the end as to how the problems will be resolved. And how faith and forgiveness and compassion can change their lives.

The characters are engaging, especially the characterization of Rebecca, Jackson’s little girl. Her personality rises right off the pages, and I feel as if she’s an actual child I know and can’t wait to see again. I’ll always remember her characteristic twirl.

Weatherholt’s book is one I want to pass on to several people because they will love moving to Sweet Gum, a town with a heart, for the duration. 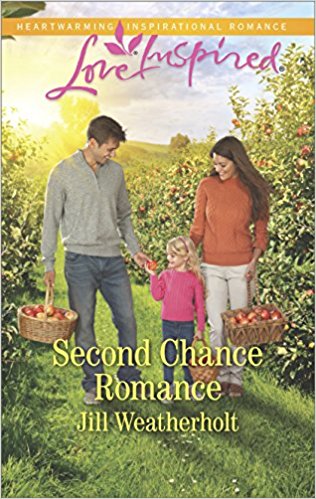 Once you’re done reading Jill’s and Carrie’s books, please leave a review–even a couple of sentences will do–on Amazon (and Goodreads is you’re over there) for them! I know they will appreciate it. Don’t be like I was with Carrie’s review–waiting until I had just the right words to say. It’s more important to put up a review, even if it’s short, than to worry if you are writing it well enough. I wish I had realized that myself and not made Carrie wait all this time.