Yesterday was a lousy day. My 16-year-old cat, Mac, was diagnosed with diabetes. The vet wants him to have two shots of insulin a day. I have no problem giving a cat a shot–my cat Pear needed allergy shots for years. But Mac has been very irritable in the last year. While he gives me face kisses on a several-times-a-day schedule without a problem, he most likely will not want shots.  Just a guess on my part, but everybody who knows him agrees. 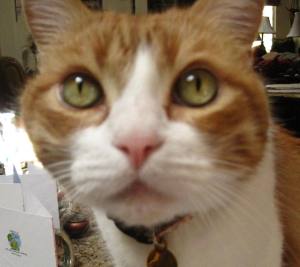 That was my memoir sound byte of the day. Now on to the review of the week. It’s sort of a retread review, but a book you can’t miss.

In February 2013, on another blog, I wrote two posts about a memoir by a voice that is rarely heard: the voice of someone who grew up a ward of the state–a foster child. Here are excerpts from my posts:

Last night I finished reading Ashley Rhodes-Courter’s memoir Three Little Words.  The book, published in 2009, tells the story of how Ashley survived in Florida’s foster care system. Eventually she was adopted by a family with two adult sons, and she began a battle through the courts to seek justice and help for other foster children.

On Rhodes-Courter’s website, the synopsis is described this way:

“Sunshine, you’re my baby and I’m your only mother. You must mind the one taking care of you, but she’s not your mama.” Ashley Rhodes-Courter spent nine years of her life in fourteen different foster homes, living by those words. As her mother spirals out of control, Ashley is left clinging to an unpredictable, dissolving relationship, all the while getting pulled deeper and deeper into the foster care system.

Painful memories of being taken away from her home quickly become consumed by real-life horrors, where Ashley is juggled between caseworkers, shuffled from school to school, and forced to endure manipulative, humiliating treatment from a very abusive foster family. In this inspiring, unforgettable memoir, Ashley finds the courage to succeed – and in doing so, discovers the power of her own voice.

. . .  Ashley Rhodes-Courter . . .  was a foster child who lived in over a dozen foster homes and a shelter.  She was abused and neglected and lost in the system.  But because she eventually got a wonderful guardian ad litem to advocate for her, she ended up in an adoptive home.

In Ashley’s story, she describes how Gay Courter, her final foster mother and eventual adoptive mother, discovered that nobody had ever read a bedtime story to 13-year-old Ashley.  After that, Gay began to read Ashley “Pat the Bunny, Goodnight Moon, and Where the Wild Things Are.”

I took special note of the book choices because when I used to teach children’s literature, the picture books I used for in-depth analysis were Goodnight Moon and Where the Wild Things Are.  What phenomenal stories to introduce to Ashley.  They both are centered on images of the moon and the mother hovering in the background of the house.  The moon can be synonymous with the mother figure.  In this way, it could be seen that the mother in the house with the child is the adoptive mother and the moon overlooking, but at a distance, is the child’s birth mother.

. . . Ashley began babbling in baby talk and Gay responded by playing along.  Ashley declared that she wanted a baby bottle because her mother took hers away too soon.  This can also be “read” as Ashley losing her mother too soon.  Gay bought Ashley a bottle the very next day, and Ashley drank out of the bottle with relish.

I’m not a psychologist, and I’ve always pooh-poohed more “radical” ideas like the notion of taking somebody back to their babyhood.  But in Ashley’s story, she clearly initiated these actions herself, and it sounds like it was short-term, but helpful to her.

Some excellent reviews have been written about Three Little Words.  I won’t try to re-invent the wheel here, but I paid attention to some things that were mentioned almost in passing, but which I felt were important.

One of these passages was when Ashley went to her first event at the White House, an invitation she received from the Dave Thomas Foundation.  She was blushing with excitement and confesses “that it was as if my childish fantasies about accidentally being lost in foster care, while I was really meant for another, grander life, had come true.”  In literature, we see the “Cinderella” story being one of the most prevalent story types there is.  Harry Potter is a Cinderella character–an orphan raised by mean relatives until he goes off to Hogwarts and discovers that he is destined for greatness.  What a powerful fantasy to keep one going in the worst of times, to know that one deserves much more.

Ashley Rhodes-Courter’s book is a treasure to foster children and to a system that needs fixing so badly.  Every person who reads this book will feel a desire to advocate for these kids and to see the system change.  As a teen, Ashley herself sees the movie Erin Brockovich and decides that she will be like Erin and stand up for what’s right.  She will help other children who are enmeshed in the foster care system.  Today she is a public speaker on this issue and a foster mother.

When I read Rhodes-Courter’s book, I wasn’t looking at memoirs as a writer, but rather as an adoptive mom who cares about the plight of children–especially those without “representation.”

What do I find when I look at the book as a writer? I was transfixed by Rhodes-Courter’s story and surprised at the story-telling powers of a writer so young (Rhodes-Courter was 24 when her book was published). What I really learned from this book was not about writing, but about living. I learned how important it is to listen to the voices of those who often are not heard, how there are ways to help foster children without being a foster parents (becoming a guardian ad litem will give a child a voice in court!), and what it’s like to be a child caught up in the “system.”

This book should be read by teens, as well as adults.